OK, OK, I know, I’ve been terrible at posting anything here, no news and updates or anything else, even though things have been happening. I can only apologise for being so lax. I guess most of the time I’m always putting out any news and such via Twitter and Facebook – but I recently had some news I thought was worthy of putting up and commemorating here.

I was having a quick check of Twitter on Thursday morning when I saw I was tagged into a tweet congratulating me and some other authors (thanks Tracy). I had no idea what it was about so I checked out the link. I had to read the announcement a couple of times before it really sank in but it seems I’ve been longlisted for the CWA Gold Dagger 2021 for Stone Cold Trouble!

I was not expecting that at all!

It was a real shock. I mean, I knew the longlists for the various Daggers were due to be announced soon and I thought I’d check them out at some point, as I always do, for good recommendations of books I may have missed in the last year. As it happens, I’d totally forgotten when the longlists were coming out and so it wasn’t on my mind at all. I would’ve seen them eventually during the day, for sure, and had a read, like any interested reader but I never expected to see my name on any of the lists, let alone for the Gold Dagger.

It’s a hell of a list to be on, in some great company – a load of fantastic books and wonderful authors. Congratulations to all of them. The very nature of these things means that most of us won’t make it onto the shortlists but it’s still wonderful to get a nod like this and I aim to make the most of it while I can. Make hay while the the sun shines, as the saying goes.

The best of luck to everyone up for any of the awards.

Here’s a link to the CWA announcement with all of the longlists for the various Daggers at the bottom of the page. https://thecwa.co.uk/news/cwa-dagger-awards-longlists-announced

I was on Twitter earlier today and saw a link to this short movie called “7.2” by Nida Manzoor. I gave it a quick watch and liked it so much, I thought I’d post the link to it here. Think “Kick Ass” meets “The Inbetweeners” with a mainly female cast. I think it’s brilliant. Apparently, so do a lot of other people as it’s now being developed for TV. Well done to all involved. Check it out below for yourselves…

7.2 from Nida Manzoor on Vimeo.

So, it’s been another few weeks and as I still hadn’t heard back from my editor I thought it’d be OK to email her, just to see where things were at. She normally responds very promptly, so when I didn’t hear back after a couple of days, I began to think that maybe something had happened. I’m a fiction writer after all, so I was imagining all sorts of weird and wonderful scenarios. At this stage, I thought I’d forward the email directly to my agent. She replied almost straight away, apologising and informing me that the editor was in fact away on holiday and had forgotten to set her out-of-office notification on her email. With regard to the manuscript, which I was waiting to hear back about to find out if it needed any further amends and tweaks, she told me that she had in fact already sent it out on submission to publishers! The news was a complete surprise! I’d had no idea what they thought of the most recent draft I’d sent them and here I was finding out that it had already gone out on submission. I guess they must have been happy with it. There I was, totally unaware of the fact that my novel was now in the process of being read by crime fiction editors at a number of publishing houses. Sometimes ignorance really is bliss. With the London Book Fair having just taken place and the launch of the Theakston’s Old Peculiar Crime Festival, as well as loads of other things going on in the publishing world, it’s a very busy time. Which basically means I’m back to waiting again – only this time it’s to find out if anyone likes my book enough to make an offer on it. I’m trying to stay calm about it at this stage. There’s no guarantee it’ll be bought, so there’s no point getting too excited. I haven’t told anyone yet. It’s a nerve wracking time but all I can do is wait to hear from my agent – with either good news or bad. Gulp!

Here’s a link to a radio interview with the writer Joe R. Lansdale, who’s another writer I’m a big fan of, especially his Hap and Leonard series. He’s published more than 40 novels and 30 short stories and in the interview he talks about his new Hap and Leonard thriller as well as his early life and how he became a writer. 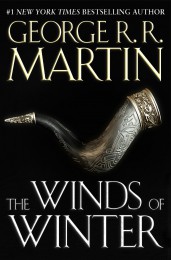 Like thousands of others, I am eagerly awaiting the arrival of winter – ‘The Winds of Winter’ that is, the next installment of George R.R. Martin’s epic fantasy series. It looks like it’s going to be a bit of a wait though – 2017 at the earliest. I wish Mr Martin all the best with it. I’d much rather he took his time and got it right, than rush it to meet a deadline and not be 100% happy with the result. In the meantime we can just wait and wonder what will happen next.

I loved this book! I thought it was one of the best things I read last year. How Andy Weir wrote it and then got a publishing deal is an interesting story in itself. Anyway, the book… great idea, great main character, great voice, great geeky science aspect – just fantastic. I couldn’t put it down. I recommended it to anyone who asked me for a title to read. I held off seeing the film, as I knew the usual thing would occur, where the film’s not quite as good as the book. I saw it eventually and it was a good film, though for me the book was still better. You get a much better understanding of the character and what he’s going through and all the science is more fully explained so you get exactly what’s going on.

So, I’m waiting to find out what the verdict is. I submitted the seventh draft of my first novel to the editor at my literary agency at the beginning of this week. Once she’s had a chance to go through it, she’ll let me know if it requires any more work. The feedback I had on the previous draft was very positive overall and I had just over three pages of notes to work through, to clarify certain issues and make some small changes. Hopefully, I managed all of them OK and if there is any more to do, it won’t be too much. All I can do now is wait … 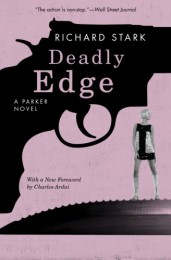 I’m a huge fan of the Parker novels and this is the one I’ve read most recently. For those who don’t know, Parker is a professional thief, and one who’s very good at what he does. The writing style is lean and mean and a lot happens in the stories. I’m working my way through the whole series in order, though I tend to read other things in between, so I can stretch them out a bit, as there are only so many. I discovered the novels after seeing the movie ‘Payback’ with Mel Gibson, which is one of my favourite films. I knew it was based on the movie ‘Point Blank’ which was based on the novel of the END_OF_DOCUMENT_TOKEN_TO_BE_REPLACED

Hello and welcome to my new website and blog. I’ve been meaning to set up something like this for quite a while but have only just managed to find time to actually do it. I’ll be using the site as place to keep you updated on any progress with the book(s), my writing and any news relating to those things but I also wanted somewhere to share my enthusiasm for other things, like books, films, TV shows, music and random other stuff, hence the name.